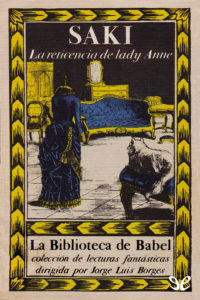 Is it possible to establish a connection between Saki and Argentina? It is indeed. Saki mentions Argentina on two occasions. In ‘The Way to the Dairy’ we find: “The Brimley Bomefields had a collective attack of nervous prostration on the day when she sold out a quantity of shares in Argentine rails”, and then in ‘Fur’ we also find: “Well, old Bertram Kneyght is over in England just now from the Argentine”.

Furthermore, the link between Saki and Borges is even more fascinating. They never physically met each other: Saki died tragically in 1916 and Borges was born in 1899. Different ages, different places. Yet a certain “relationship” between these two authors does reveal itself as true.

Intellectually, Borges grew up in his father’s personal library, a collection full of English books. Moreover, Borges inherited his father’s literary idols such as Swinburne, Keats, Spencer and Shelley. Guillermo Borges translated Edward FitzGerald’s Rubáiyát into Spanish and his version of the famous Persian poem was finally published in Proa, a literary magazine established by his son and Ricardo Güiraldes, in the year 1924. Later on, Borges wrote a poem about Omar Khayyám’s masterpiece. As we know, Saki took his peculiar penname from the Rubáiyát stanzas. In his preface to ‘The Reticence of Lady Anne’, Borges confirms this conjecture: “His name, Munro, belongs to an ancient Scottish family; his penname, Saki, comes from the Rubáiyát (this word in Persian means cupbearer)”.1

Saki and Borges were cosmopolitans. About Saki’s cosmopolitanism, we should recall A.A. Milne’s words: “A strange creature, this Saki, to us many others who were trying to do it too. For we were so domestic, he so terrifyingly cosmopolitan”.2 During his youth, Saki travelled around Europe with his father and siblings. In nineteenth-century Victorian England, it was common for upper-class young adults like Saki, who had recently finished grammar school, to travel to the Continent, visiting museums, recreational resorts and art galleries in France, Germany and Switzerland.  This “educational trip” allowed Hector Munro to absorb entirely the historical, cultural and social Mitteleuropa atmosphere. As Charles Gillen declares: “This tour, too, helped to make Munro the true cosmopolitan”.3 In his adulthood, Saki also discovered Russia and the Balkans as a journalist working for The Morning Post. Yet Saki always returned to London. England was his shelter, far from the madding crowd. Borges asserts:

His life was a cosmopolitan one, but all his work (with the exception of one short story that we will mention later on)4 happens in England, in that England of his melancholic childhood. He never got over that period, whose irreparable misfortune was his literary matter. There is nothing special about this fact; unhappiness is, as they said, one of the elements of poetry. That England he suffered and took advantage of, was that of the Victorian middle class, ruled by boredom, organisation and by the eternal repetition of certain habits. Munro satirised that society with a quintessentially English dry humour.

In 1914, just before the Great War began, Borges and his family moved to Europe because his father’s eyesight had started to fail (Borges would inherit his father’s congenital blindness). In Geneva, a famous eye doctor treated Guillermo Borges while his son “Georgie” went to school. This tour to Europe was also considered essential for an Argentinian upper-class young adult: a chance to gain first-hand acquaintance with the Western culture. Besides, in those days the Argentine peso was strong.

Apparently, Borges was unhappy in Geneva because he couldn’t get used to the misty, damp and cold weather. He summarises his gloomy experience there: “I spent the war years in Geneva; [it was] a no-exit time, tight, made of drizzle, which I’ll always remember with some hatred”.

Later on, the Argentine fiction author Adolfo Bioy Casares (a very close friend of Jorge Luis Borges) became Saki’s first Spanish translator in 1940 with his version of ‘Sredni Vashtar’. It was published by Sur, one of the most important literary magazines in Buenos Aires during the 20th century. Borges and Bioy Casares were fascinated by this tale. Both certainly enjoyed speculative as well supernatural fiction. Borges declares particularly about ‘Sredni Vashtar’: “If we have to choose between two short stories of our anthology (and we are certainly not compelled to that duality), we would focus on ‘Sredni Vashtar’ and ‘The Interlopers’. The first one, as in every good story, is ambiguous: We can assume that Sredni Vashtar was really a god and that the unfortunate child sensed it, but the hypothesis that the child’s cult made a divinity from the ferret is also reasonable, nor is it prohibited to think that the force of the animal came from the child that might have really been the god and didn’t know it. It is fine that the ferret goes  back to the unknown from where it came; not less admirable is the disproportion between the happiness of the freed child and the trivial fact of making toast”. 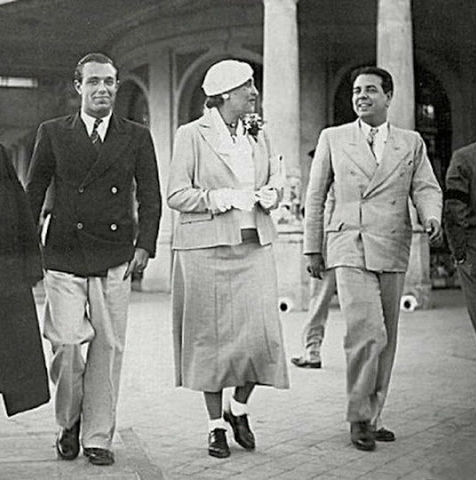 The only “discrepancy” between Borges and Saki was another British author: George Bernard Shaw. Borges esteemed him intensely and listed Shaw as one of his four favorite authors (the others were Cervantes, Chesterton and Emerson). Borges once declared drastically, “Shaw seems the only author I’ve read”. On the other hand, Saki couldn’t bear Shaw at all. In fact, he parodied him as “Sherard Blaw” in The Unbearable Bassington. In addition, the title of his book Beasts and Super-Beasts is just a mere satire of Shaw’s four-act drama Men and Super-Men. Bernard Shaw’s socialism and popularity were so unbearable for Hector Munro…

In conclusion, Saki and Borges were both remarkable and irreplaceable storytellers with a unique sense of irony. Borges was also a very fine reader and he explored British literature with a singular mastery. Definitively, Saki was part of his vast group of literary idols.

This is a guest blog post by Juan Facundo Araujo of the Universidad de Buenos Aires. He has both published and given presentations on various aspects of Saki. His currently research is into the depiction of suffragettes in Munro’s work. My thanks to him for agreeing to write something for this blog about Saki and Latin America.