Earlier this year, the Guardian newspaper published an article on the blue plaques put up on buildings in Britain to commemorate famous people who lived /worked there, together with interviews with the celebrities asked to unveil them. In Saki’s case, the plaque is on Mortimer Street, London W1, and the novelist Will Self (a Saki fan) was the invitee. Here’s what he wrote about it: 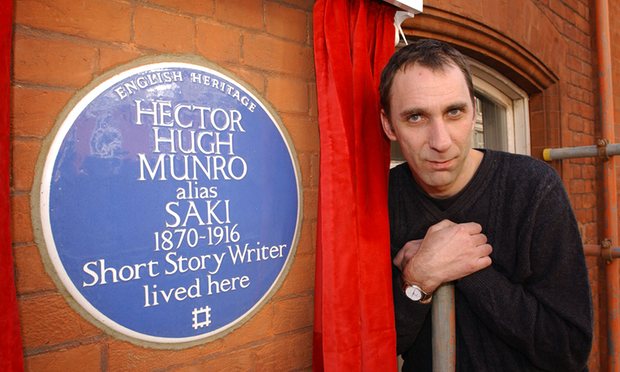 ‘A somewhat unorthodox day’ … Will Self unveils the plaque for HH Munro. (From The Guardian)

I unveiled a blue plaque for English Heritage once – it’s the one on Mortimer Street for HH Munro (Saki, the short story writer). Scaffolding had been set up outside the building, and Loyd Grossman and I (at that time he was the head of the blue plaque committee) crawled over a desk and out of a window to access it. As I recall, the tenant of the desk didn’t even stop working. Later we went to the Fitzroy Tavern for a celebratory drink, and I ended up chatting with Saki’s biographer, a portly American gentleman in a trench coat, who told me how, when he was doing his research, he tracked down two descendants of the writer: suitably enough, a couple of ageing spinsters in a mouldering house somewhere in Northern Ireland. (Remember the fate of such types in Saki’s stories, such as Shredni Vashtar.) And in the attic of the mouldering house the biographer found a tin trunk, and in the tin trunk he found a cache of Saki’s papers, including “account books” in which the man-about-town had set down, um, accounts of all the young men he’d had about town, including their vital penile statistics. It was a fitting end to a somewhat unorthodox day.

Reposted here under the terms of the Guardian’s (very generous) Open License.