[In the run-up to Remembrance Day, here’s a piece Saki wrote while serving in the trenches in northern France in 1916 (with some extra pictures).]

Considering the enormous economic dislocation which the war operations have caused in the regions where the campaign is raging, there seems to be very little corresponding disturbance in the bird life of the same districts. Rats and mice have mobilized and swarmed into the fighting line, and there has been a partial mobilization of owls, particularly barn owls, following in the wake of the mice, and making laudable efforts to thin out their numbers. What success attends their hunting one cannot estimate; there are always sufficient mice left over to populate one’s dug-out and make a parade-ground and race-course of one’s face at night. In the matter of nesting accommodation the barn owls are well provided for; most of the still intact barns in the war zone are requisitioned for billeting purposes, but there is a wealth of ruined houses, whole streets and clusters of them, such as can hardly have been available at any previous moment of the world’s history since Nineveh and Babylon became humanly desolate.[1] Without human occupation and cultivation there can have been no corn, no refuse, and consequently very few mice, and the owls of Nineveh cannot have enjoyed very good hunting; here in Northern France the owls have desolation and mice at their disposal in unlimited quantities, and as these birds breed in winter as well as in summer, there should be a goodly output of war owlets to cope with the swarming generations of war mice. 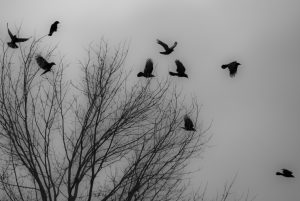 Apart from the owls one cannot notice that the campaign is making any marked difference in the bird life of the country-side. The vast flocks of crows and ravens that one expected to find in the neighbourhood of the fighting line are non-existent, which is perhaps rather a pity. The obvious explanation is that the roar and crash and fumes of high explosives have driven the crow tribe in panic from the fighting area; like many obvious explanations, it is not a correct one. The crows of the locality are not attracted to the battlefield, but they certainly are not scared away from it. The rook is normally so gun-shy and nervous where noise is concerned that the sharp banging of a barn door or the report of a toy pistol will sometimes set an entire rookery in commotion; out here I have seen him sedately busy among the refuse heaps of a battered village, with shells bursting at no great distance, and the impatient-sounding, snapping rattle of machine-guns going on all round him; for all the notice that he took he might have been in some peaceful English meadow on a sleepy Sunday afternoon. Whatever else German frightfulness may have done it has not frightened the rook of North-Eastern France; it has made his nerves steadier than they have ever been before, and future generations of small boys, employed in scaring rooks away from the sown crops in this region, will have to invent something in the way of super-frightfulness to achieve their purpose. Crows and magpies are nesting well within the shell-swept area, and over a small beech-copse I once saw a pair of crows engaged in hot combat with a pair of sparrow-hawks, while considerably higher in the sky, but almost directly above them, two Allied battle-planes were engaging an equal number of enemy aircraft. 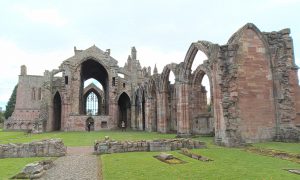 Unlike the barn owls, the magpies have had their choice of building sites considerably restricted by the ravages of war; the whole avenues of poplars, where they were accustomed to construct their nests, have been blown to bits, leaving nothing but dreary-looking rows of shattered and splintered trunks to show where once they stood. Affection for a particular tree has in one case induced a pair of magpies to build their bulky, domed nest in the battered remnants of a poplar of which so little remained standing that the nest looked almost bigger than the tree; the effect rather suggested an archiepiscopal enthronement taking place in the ruined remains of Melrose Abbey.[2] The magpie, wary and suspicious in his wild state, must be rather intrigued at the change that has come over the erstwhile fearsome not-to-be-avoided human, stalking everywhere over the earth as its possessor, who now creeps about in screened and sheltered ways, as chary of showing himself in the open as the shyest of wild creatures.

The buzzard, that earnest seeker after mice, does not seem to be taking any war risks, at least I have never seen one out here, but kestrels hover about all day in the hottest parts of the line, not in the least disconcerted, apparently, when a promising mouse-area suddenly rises in the air in a cascade of black or yellow earth. Sparrow-hawks are fairly numerous, and a mile or two back from the firing line I saw a pair of hawks that I took to be red-legged falcons, circling over the top of an oak-copse. According to investigations made by Russian naturalists, the effect of the war on bird life on the Eastern front has been more marked than it has been over here. “During the first year of the war rooks disappeared, larks no longer sang in the fields, the wild pigeon disappeared also.”[3] The skylark in this region has stuck tenaciously to the meadows and croplands that have been seamed and bisected with trenches and honeycombed with shell-holes. In the chill, misty hour of gloom that precedes a rainy dawn, when nothing seemed alive except a few wary waterlogged sentries and many scuttling rats, the lark would suddenly dash skyward and pour forth a song of ecstatic jubilation that sounded horribly forced and insincere. It seemed scarcely possible that the bird could carry its insouciance to the length of attempting to rear a brood in that desolate wreckage of shattered clods and gaping shell-holes, but once, having occasion to throw myself down with some abruptness on my face, I found myself nearly on the top of a brood of young larks. Two of them had already been hit by something, and were in rather a battered condition, but the survivors seemed as tranquil and comfortable as the average nestling.

At the corner of a stricken wood (which has had a name made for it in history, but shall be nameless here), at a moment when lyddite[4] and shrapnel and machine-gun fire swept and raked and bespattered that devoted spot as though the artillery of an entire Division had suddenly concentrated on it, a wee hen-chaffinch flitted wistfully to and fro, amid splintered and falling branches that had never a green bough left on them. The wounded lying there, if any of them noticed the small bird, may well have wondered why anything having wings and no pressing reason for remaining should have chosen to stay in such a place. There was a battered orchard alongside the stricken wood, and the probable explanation of the bird’s presence was that it had a nest of young ones whom it was too scared to feed, too loyal to desert. Later on, a small flock of chaffinches blundered into the wood, which they were doubtless in the habit of using as a highway to their feeding-grounds; unlike the solitary hen-bird, they made no secret of their desire to get away as fast as their dazed wits would let them. The only other bird I ever saw there was a magpie, flying low over the wreckage of fallen tree-limbs; “one for sorrow”, says the old superstition. There was sorrow enough in that wood.

The English gamekeeper, whose knowledge of wild life usually runs on limited and perverted lines, has evolved a sort of religion as to the nervous debility of even the hardiest game birds; according to his beliefs a terrier trotting across a field in which a partridge is nesting, or a mouse-hawking kestrel hovering over the hedge, is sufficient cause to drive the distracted bird off its eggs and send it whirring into the next county.

The partridge of the war zone shows no signs of such sensitive nerves. The rattle and rumble of transport, the constant coming and going of bodies of troops, the incessant rattle of musketry and deafening explosions of artillery, the night-long flare and flicker of star-shells, have not sufficed to scare the local birds away from their chosen feeding grounds, and to all appearances they have not been deterred from raising their broods. Gamekeepers who are serving with the colours might seize the opportunity to indulge in a little useful nature study.

‘Birds on the Western Front’ by Saki (H.H. Munro), taken from The Square Egg and Other Sketches (public domain). Notes © 2016 Bruce Gaston. No reproduction without permission.