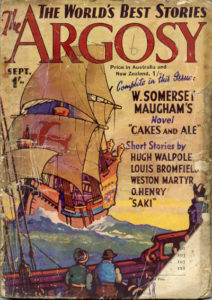 In good company! Scan from http://www.philsp.com/data/images/a/argosy_uk_193709.jpg

On the internet, if you dig beneath the pictures of people’s food or cats and the anonymous abuse of figures in public life, you sometimes come across herculean efforts of single-interest obsessiveness like the Fiction Mags Index, which indexes thousands of magazines, including “pulp” magazines, and their contents. It has listings for both “H.H. Munro” and “Saki”, which are interesting because the details given mostly refer to reprints of the stories, usually in American or Australian magazines — information that is (as far as I know) not to be found elsewhere.

My title comes from an (anonymous) article on Munro published in The Argosy in September 1937, which also republished ‘The Mouse’ (from Reginald in Russia). I may have a go at tracking down the article — the title is intriguing, to say the least.