I’m posting this more so that I can find it again if I need it than for its intrinsic interest, but nonetheless…

In ‘The Quest’, in The Chronicles of Clovis, a discussion about what sauce to serve with the asparagus for lunch is sidelined, much to Clovis’s annoyance, by the trivial matter of a missing toddler. Clovis contributes some suggestions in his inimitable way:

“Perhaps an eagle or a wild beast has carried him off,” suggested Clovis.

“There aren’t eagles and wild beasts in Surrey,” said Mrs. Momeby, but a note of horror had crept into her voice.

“They escape now and then from travelling shows. Sometimes I think they let them get loose for the sake of the advertisement. Think what a sensational headline it would make in the local papers: ‘Infant son of prominent Nonconformist devoured by spotted hyæna.’ Your husband isn’t a prominent Nonconformist, but his mother came of Wesleyan stock, and you must allow the newspapers some latitude.”

“But we should have found his remains,” sobbed Mrs. Momeby.

“If the hyæna was really hungry and not merely toying with his food there wouldn’t be much in the way of remains. It would be like the small-boy-and-apple story—there ain’t going to be no core.”

The reference, I discovered after some searching, may be to a cartoon by the British artist Phil May (1864-1903), who drew for the St Stephens Review (a weekly magazine which ran from 1883 to 1892, according to Abebooks) and for Punch. I presume Saki saw the cartoon in the latter (if it really was his source) but I haven’t been able to establish that yet. 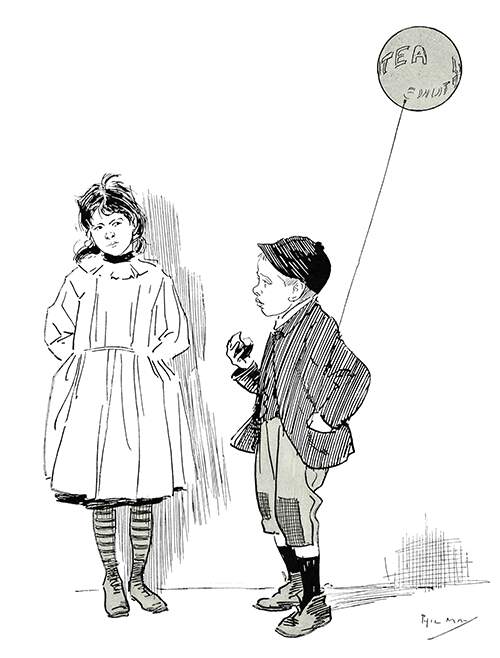 “Give us a bite of yer apple, Billy!”
“Sha’n’t!”
“Well, leave us a little bit of the core!”
“There ain’t goin’ to be no core!”.
[Found at https://www.oldbookillustrations.com/illustrations/bite-apple/]

There’s more information about Phil May here, along with some more of his cartoons:

The “no core” joke appears to be a relatively common one. In Tom Sawyer Abroad by Mark Twain (published 1894), Huckleberry Finn recounts:

Tom Sawyer was always free and generous that way. There’s plenty of boys that’s mighty good and friendly when you’ve got a good thing, but when a good thing happens to come their way they don’t say a word to you, and try to hog it all. That warn’t ever Tom Sawyer’s style—I can say that for him. There’s plenty of boys that will come hankering and gruvveling around when you’ve got an apple, and beg the core off you; but when they’ve got one, and you beg for the core and remind them how you give them a core one time, the make a mouth at you and say thank you ’most to death, but there ain’t a-going to be no core. But I notice they always git come up with; all you got to do is to wait. Jake Hooker always done that way, and it warn’t two years till he got drownded. (Chapter 1)