A quick link to an article on the theft of the Mona Lisa in 1911, an event alluded to at the start of ‘The Disappearance of Crispina Umberleigh’. 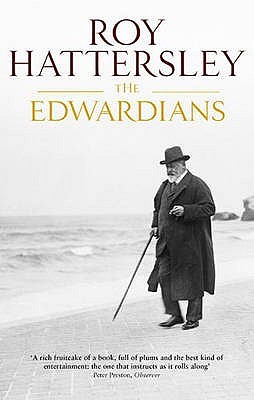 This was published a good number of years ago but I’ve only got around to reading it now.

Although there is no mention of Munro at all, the book provides useful and entertaining background information about the period when he was writing and publishing. Hattersley begins with the death of Queen Victoria and continues with a panoramic sweep across politics, society, culture and science, ending (inevitably) with the outbreak of the First World War.

The author (who I should perhaps explain for non-UK readers was for many years a Labour MP and served as a member of the government in the 1970s) is particularly good on the politics and personalities of the time. Such knowledge is really indispensable if you want to properly appreciate early satires such as The Westminster Alice. His treatment of the trade union movement and the founding of his own party is similarly well-informed (though less relevant to readers of Munro).

The whole story is told in an engaging and lively way. He has some nice turns of phrase and a good eye for an interesting detail. A highlight was the section on the pioneers of motoring, from which I can’t resist quoting the following, describing one episode in the Automobile Club of Britain’s first attempt at “what, today, would be called a rally”:

Halfway to the summit of the Cumbrian Hills, the Ariel tricycle’s clutch failed and it began to roll backwards – accelerating as it descended towards the valley floor. It was then that the driver discovered, to his surprise, that the brakes only worked when the vehicle was going forwards. He managed to steer successfully to safety with his left hand while turned in his seat to watch the road over his right shoulder. Unfortunately that required him to push his passenger out on to the road. (p. 431)

I even found the section on cricket (a sport I have no understanding of or interest in) readable.

Years ago I read his sort-of-sequel Borrowed Time: The Story of Britain Between the Wars  and I remember the chapters on literature in that being a real weakness, so it was a relief to find a more detailed and considered discussion of writers and their works in The Edwardians – one that actually gives the impression Hattersley had read the books and formed his own opinions on them rather than copying sections out of some undergraduate guide to Twentieth Century Eng. Lit.

Possibly he read a little too much Virginia Woolf, though. How else to explain his calling the Belfast shipyard that built the Titanic “Harland and Woolf”? Coming from Northern Ireland, I feel I must put on record that it is Harland and Wolff. (One of the founders was a German, which is a little ironic when you consider that one of the big issues of the period was Anglo-German rivalry, particularly when it came to building ships.)

Despite that error (and the bizarre typo that has the Balkan Wars against the Ottoman Empire starting two years late in September 1914), this book is definitely to be recommended.