Presented below for the first time since they originally appeared on 12 March 1913 in The Bystander are Saki’s satirical verses on a suffragette, with illustrations by ‘Pat’. The views expressed are in line with the tenor of stories such as ‘The Gala Programme’ (The Square Egg) and ‘Hermann the Irascible–A Story of the Great Weep’ (The Chronicles of Clovis).

Saki fans will no doubt also note parallels with ‘Laura’ (Beasts and Super-beasts), which also takes for its plot the repeated reincarnation of an annoying woman.

For the sake of the search engines, here is the text by itself. You can see the actual illustrated version if you scroll down.

A Suffragette Lobelia was,
She early left this life because
(She had the rottenest of luck)
She too sincerely hunger-struck.
Mere death her spirit could not tame,
A super-nuisance she became:
On every club she made her raids
–They slew her with the ace of spades.
She wrecked, with penetrating scorn,
the après-midi of the Faun;
And now another shape she wore,
She propaganda’d more and more.
Fierce androphobia winged her feet,
she bit three men in Downing Street.
The men were pasteurised – her bark,
was silenced in St. James’s Park.
Then took she yet another shape,
The larger, fiercer breed of ape.
She met a military man,
Who in the wrong direction ran.
It scarcely served her wrath to cool,
To find herself a boy at school;
She sought the other boys to vex
–And now she really loathes the sex. 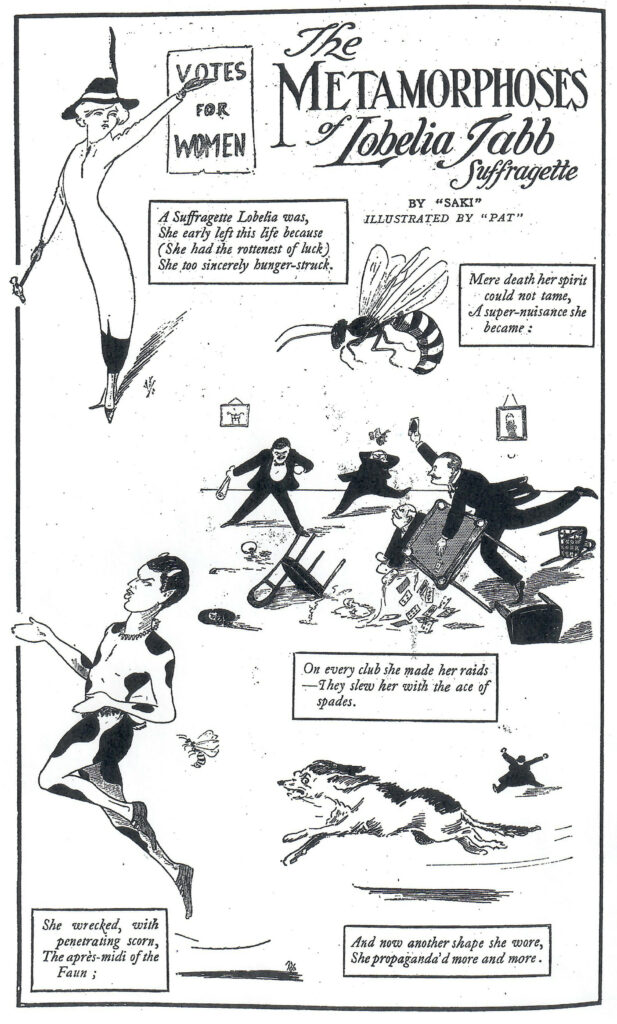 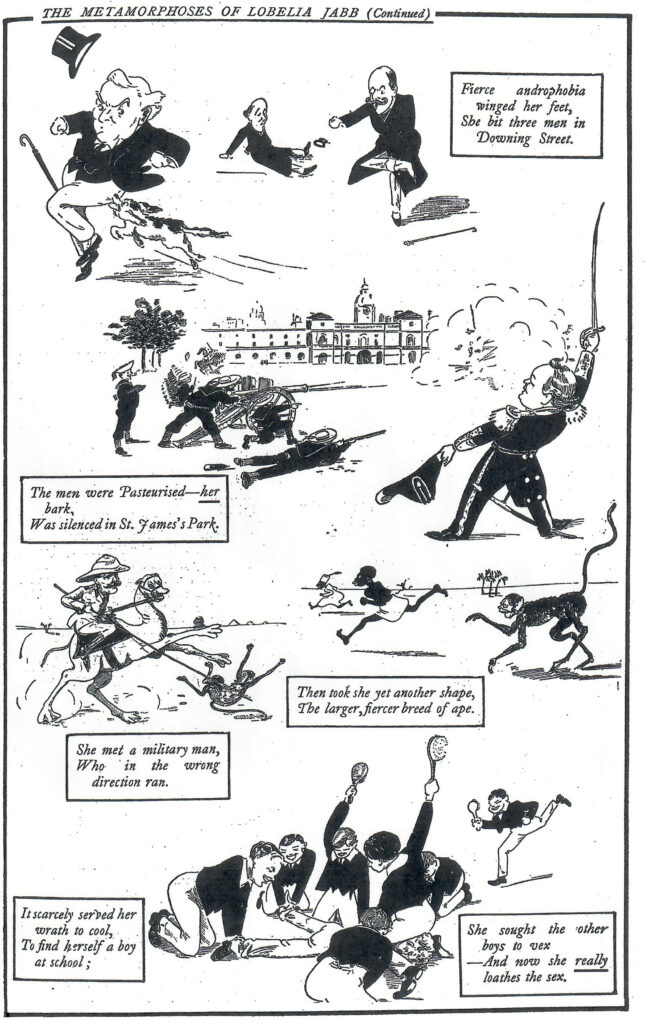 My thanks are due to Brian Gibson for sending me a photocopy of the original. Interested readers are advised to consult pages 143–146 of his book Reading Saki: The Fiction of H.H. Munro for a discussion of this piece. 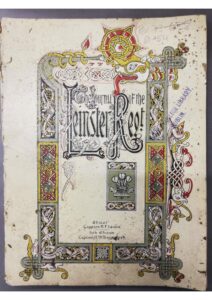 The Journal of the Leinster Regiment vol.1, no.4 (1910) frontispiece

It’s fairly well known that Munro published most of his short stories in newspapers and periodicals first; only later were they collected and published in book form. Principal recipients were the Westminster Gazette and the Bystander. The acknowledgements to his third collection, The Chronicles of Clovis, also mention a journal I’d never heard of:

‘The Background’ originally appeared in the ‘Leinsters’ Magazine’.

So, of course, I decided to look it up.

Slightly surpisingly, the magazine was the ‘in-house’ newspaper of a regiment of the British Army. The Prince of Wales’s Leinster Regiment (Royal Canadians), to give it its full name, was an infantry regiment formed in 1881 by merging the 100th (Prince of Wales’s Royal Canadian) Regiment of Foot and the 109th Regiment of Foot (Bombay Infantry). I managed to find a history of the regiment online  which has the following to say about its magazine:

It while the Battalion was at Devonport [i.e. from 1909] that its second regimental paper was born. The Journal of the Leinster Regiment, or as it was called later, the Leinsters’ Magazine owed its success to the ability and demoniac energy of its editor, Captain R. F. Legge, assisted by Captain R. M. Raynsford as its sub-editor. It struck a completely new note in regimental journalism by subordinating regimental intelligence to general articles grave and gay, and, speaking with that impartiality which only the lapse of years can ensure, the opinion may be hazarded that neither before nor since has the Leinsters’ Magazine had a serious rival. It enlisted some distinguished outside writers, including the present Lord Rawlinson, Hilaire Belloc, C. B. Fry, the late Frank Richardson, Stephen Gwynn, Major Drury, L. S. Amery, Aliph Cheem, Saki, and many others. It was splendidly illustrated, turned out in Messrs. Gale & Polden’s very best style, and the amount of advertisements was the despair of rival regimental journals. It made a feature in each issue of humorous verse and was the only regimental paper which ever published a comic opera on the subject of manoeuvres. Alas! when the Battalion  was ordered abroad the editor got a home job and the inevitable upheaval caused by the change to India killed the magazine which perished after just two years’ brilliant existence.

I wonder what exactly were the circumstances behind Munro’s involvement? Why not go with one of his more regular ‘customers’? There’s nothing military about ‘The Background’ that would have made the Leinsters’ Magazine a particularly suitable place for it. Langguth’s biography doesn’t mention it at all, nor is there anything in Byrne or Gibson’s books. With so many of Saki’s papers lost forever, perhaps we’ll never know.

I subsequently noticed that ‘The Baker’s Dozen’ in Reginald in Russia also originally appeared in the same magazine, though in this case it is credited with its full title The Journal of the Leinster Regiment.

A student of mine kindly sent me scans from the copy in Trinity College Dublin’s libary so I added one as an illustration to this post.

The History of the Prince of Wales’s Leinster Regiment, Volume 1, by Lieutenant-Colonel Frederick Ernest Whitton, p. 156.