Even many years ago, before I started seriously studying Saki, I was struck by the presence of central and eastern Europe, the Balkans and Russia in his stories. ‘Reginald in Russia’ is a very obvious example, but there are so many other stories set in that part of the world: ‘The Wolves of Cernogratz’, ‘The Easter Egg’, ‘The Name-Day’, ‘The Interlopers’ (just to name a few that spring to mind straightaway).

‘Wratislav’ is a particularly interesting example. Although it is clearly set in Vienna, as the reference to the Graben (one of the main shopping streets) makes clear, this setting has no real bearing on or importance in the story. Indeed, it is quite incongruous, given that it begins with a comment by Clovis (how he came to know two aristocratic Austrian families is left unexplained)[1] and ends with a play on the English saying ‘Conscience makes cowboys of us all’.

I had therefore contemplated writing up something about the topic. As it turns out, someone has already gone some way down that path. Vesna Goldsworthy’s Inventing Ruritania: The Imperialism of the Imagination, however, is not specifically about Saki but looks at the works of a number of writer. According to the blurb:

Through much of the nineteenth and twentieth centuries, writers and filmmakers in Western Europe and America have found in the Balkans a rich mine of images for literature and the movies. Bram Stoker’s Transylvania and Anthony Hope’s Ruritania are among the best known of these images. In this pioneering book, Vesna Goldsworthy explores the origins of the ideas that underpin Western perceptions of the “Wild East” region of Europe. She examines Western and East European letters, diaries, personal interviews, and a wide range of Balkan-inspired literature. She shows how the lucrative exploitation of Balkan history and geography for Western literature and for the entertainment industry has affected attitudes toward the countries of the region and the West’s political involvement.

I haven’t read it (yet) so I can’t comment on exactly what she has to say about Saki, but after examining the table of contents on amazon.com, I can tell you that there is a section called “Saki’s Lost Sanjak” (referring to the story ‘The Lost Sanjak’ in Reginald in Russia) in a chapter entitled “War and Diplomacy in the New Ruritania: Comic Visions of the Balkans”. Other writers dealt with include E.M. Forster, George Bernard Shaw, Evelyn Waugh as well as – of course – Anthony Hope, whose The Prisoner of Zenda is the key text in this genre (and a pretty good read if I remember correctly).

Recently acquired as part of my research into the context of Saki’s writings: biographies of two prominent politicians of the time: Joseph “Joe” Chamberlain and George Curzon (Lord Curzon). 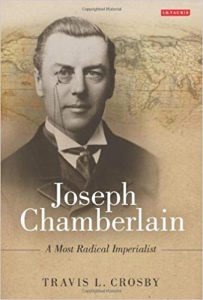 Both were flamboyant politicians who never reached the absolute peak of the premiership. Chamberlain was a successful businessman and pioneering local politician in Birmingham before he went into national politics. He was first a liberal, then a Conservative, and had an independent personality strong enough to cause splits in both parties when he disagreed with their policies. Curzon showed extreme promise from early in life and as an undergraduate at Oxford inspired a poem which you still find sometimes in anthologies of light verse:

My name is George Nathaniel Curzon,
I am a most superior person.
My cheeks are pink, my hair is sleek,
I dine at Blenheim once a week.

Understandably, both were (along with the languid, golf-playing Arthur Balfour) favourite targets of satirists and caricaturists. Chamberlain appears in The Westminster Alice as the Red Queen and later as the Mad Hatter; in “John Bull’s Christmas Tree” he is drawn by Francis Carruthers Gould as a monocle-wearing machine gun. Curzon comes up less frequently in Munro’s works. He is “Kedzon” in “Ministers Of Grace” (The Chronicles of Clovis), a nom à clef made from his title “Lord Curzon of Kedleston”. I suspect he is also the butt of Clovis’s quip “My aunt has been known to learn humility from an ex-Viceroy”, Curzon having served as Viceroy of India from 1899–1905 (“The Jesting Of Arlington Stringham”, also in The Chronicles of Clovis).

Yahoo republishes an article in the Daily Telegraph about the Victorian bathhouse. While most of the article is about the fashion for orientalism in architecture and design in the nineteenth century, it does begin with a picture of the Jermyn Street Turkish bath where Saki set ‘The Recessional’.

Turkish baths occur occasionally in Saki’s stories. (I speculated a bit about the reasons here.) The habit of going to such places also provoked the following bit of wisdom about human nature:

Spayley had grasped the fact that people will do things from a sense of duty which they would never attempt as a pleasure. There are thousands of respectable middle-class men who, if you found them unexpectedly in a Turkish bath, would explain in all sincerity that a doctor had ordered them to take Turkish baths; if you told them in return that you went there because you liked it, they would stare in pained wonder at the frivolity of your motive. (‘Filboid Studge’)

It was Mrs. Packletide’s pleasure and intention that she should shoot a tiger. Not that the lust to kill had suddenly descended on her, or that she felt that she would leave India safer and more wholesome than she had found it, with one fraction less of wild beast per million of inhabitants. The compelling motive for her sudden deviation towards the footsteps of Nimrod[1] was the fact that Loona Bimberton had recently been carried eleven miles in an aeroplane by an Algerian aviator, and talked of nothing else; only a personally procured tiger-skin and a heavy harvest of Press photographs could successfully counter that sort of thing. Mrs. Packletide had already arranged in her mind the lunch she would give at her house in Curzon Street, ostensibly in Loona Bimberton’s honour, with a tiger-skin rug occupying most of the foreground and all of the conversation. She had also already designed in her mind the tiger-claw broach that she was going to give Loona Bimberton on her next birthday. In a world that is supposed to be chiefly swayed by hunger and by love Mrs. Packletide was an exception; her movements and motives were largely governed by dislike of Loona Bimberton.

Circumstances proved propitious. Mrs. Packletide had offered a thousand rupees for the opportunity of shooting a tiger without over-much risk or exertion, and it so happened that a neighbouring village could boast of being the favoured rendezvous of an animal of respectable antecedents, which had been driven by the increasing infirmities of age to abandon game-killing and confine its appetite to the smaller domestic animals. The prospect of earning the thousand rupees had stimulated the sporting and commercial instinct of the villagers; children were posted night and day on the outskirts of the local jungle to head the tiger back in the unlikely event of his attempting to roam away to fresh hunting-grounds, and the cheaper kinds of goats were left about with elaborate carelessness to keep him satisfied with his present quarters. The one great anxiety was lest he should die of old age before the date appointed for the memsahib’s[2] shoot. Mothers carrying their babies home through the jungle after the day’s work in the fields hushed their singing lest they might curtail the restful sleep of the venerable herd-robber.

END_OF_DOCUMENT_TOKEN_TO_BE_REPLACED

“It would be rather nice if you would put Clovis up for another six days while I go up north to the MacGregors’,” said Mrs. Sangrail sleepily across the breakfast-table. It was her invariable plan to speak in a sleepy, comfortable voice whenever she was unusually keen about anything; it put people off their guard, and they frequently fell in with her wishes before they had realized that she was really asking for anything. Lady Bastable, however, was not so easily taken unawares; possibly she knew that voice and what it betokened—at any rate, she knew Clovis.

She frowned at a piece of toast and ate it very slowly, as though she wished to convey the impression that the process hurt her more than it hurt the toast; but no extension of hospitality on Clovis’s behalf rose to her lips.

“It would be a great convenience to me,” pursued Mrs. Sangrail, abandoning the careless tone. “I particularly don’t want to take him to the MacGregors’, and it will only be for six days.”

“The last time he stayed here for a week—”

“I know,” interrupted the other hastily, “but that was nearly two years ago. He was younger then.”

“But he hasn’t improved,” said her hostess; “it’s no use growing older if you only learn new ways of misbehaving yourself.” END_OF_DOCUMENT_TOKEN_TO_BE_REPLACED

Marion Eggelby sat talking to Clovis on the only subject that she ever willingly talked about — her offspring and their varied perfections and accomplishments. Clovis was not in what could be called a receptive mood; the younger generation of Eggelby, depicted in the glowing improbable colours of parent impressionism, aroused in him no enthusiasm. Mrs. Eggelby, on the other hand, was furnished with enthusiasm enough for two.

“You would like Eric,” she said, argumentatively rather than hopefully. Clovis had intimated very unmistakably that he was unlikely to care extravagantly for either Amy or Willie. “Yes, I feel sure you would like Eric. Every one takes to him at once. You know, he always reminds me of that famous picture of the youthful David — I forget who it’s by, but it’s very well known.”[1]

“That would be sufficient to set me against him, if I saw much of him,” said Clovis. “Just imagine at auction bridge, for instance, when one was trying to concentrate one’s mind on what one’s partner’s original declaration had been, and to remember what suits one’s opponents had originally discarded, what it would be like to have some one persistently reminding one of a picture of the youthful David. It would be simply maddening. If Eric did that I should detest him.”

“Doesn’t he?” asked Clovis; “why not?” END_OF_DOCUMENT_TOKEN_TO_BE_REPLACED